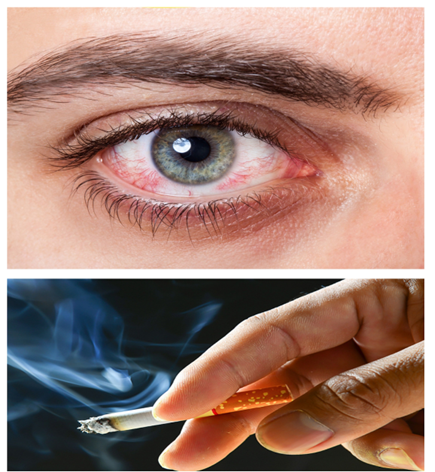 On October 18, 2021, the science magazine «Popular Mechanics» published an article entitled «Scientists told how tobacco smoke harms eye health», written by Irina Slepukhina. In this article, she mentions that the components of tobacco smoke / aerosol cause the accumulation of iron as a result it damages the cornea’s epitelium. The considered effects of smoking on the sensory organ (eyes) are based on Scientific Reports. Our team was interested in the main statement of the article by Irina Slepukhina: «Getting tobacco smoke in the eyes can provoke negative health consequences». 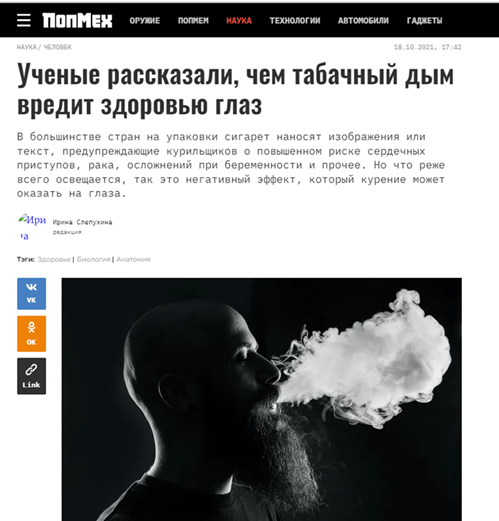 In the article, special attention is paid to the negative consequences that occur after the ingestion of tobacco smoke in the human body. However, the author doesn’t pay much attention to the smoker himself or the people around him. The author did not say anything about passive smoking, and we were interested in this issue.

On September 17, 2021, the article «Cigarette smoke extracts, and heated tobacco products promote the breakdown of ferritin and the accumulation of iron in human corneal epithelial cells» was posted on the «Scientific reports» website, a scientific mega-journal covering all areas of natural sciences. A group of Japanese scientists, including Wataru Otsu, Kodai Ishida, Naoki Chinen, Shinsuke Nakamura, Masamitsu Shimazawa, Hideshi Tsusaki & Hideaki Hara, conducted an experiment on corneal epithelial cells. They created tobacco smoke and an aerosol similar in composition to conventional tobacco smoke/aerosol containing more than 7,000 components and irritated corneal cells with it. As a result, cell death occurred. By this they proved the negative effect of passive smoking on the cornea of ​​​​the eye. 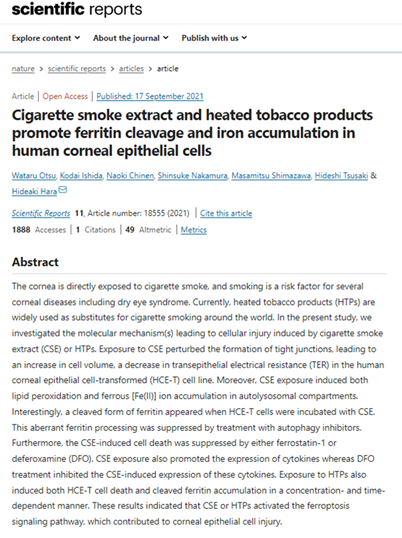 On February 17, 2021, the Optometrists Network is an educational resource founded by a team of clinical optometrists, researchers and writers dedicated to eye health and their care. The article «Does Smoking Affect the Eyes?» was written by optometrist Russell Lazarus. In this article, he claims that tobacco addiction increases the risk of vision-threatening eye diseases, including age-related macular degeneration (AMD), cataracts, glaucoma, and diabetic retinopathy. Smoking and exposure to secondhand smoke doubles the risk of developing dry eye syndrome.

Let’s clarify what age-related macular degeneration (AMD) is. This is a wide group of chronic progressive diseases in which the central zone of the nervous tissue of the eye, the macular area of ​​the retina, is gradually affected, also accompanied by a decrease in central vision. 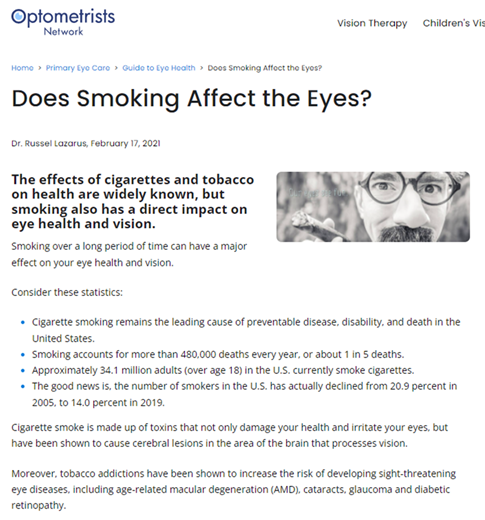 Our expert Anna Deryugina, Doctor of Biology, Head of the Department of Physiology and Anatomy at the Institute of Biology and Biomedicine, Lobachevsky University were asked if there is a causal relationship between the effects of smoking on the eyes and passive smoking. She answered :

It exists, but to understand the mechanism, you need to know what exactly affects the eyes. The composition of tobacco smoke includes: nicotine, tar, carbon monoxide (CO). The resin contains: polycyclic aromatic hydrocarbons (PAHs), primarily benzo(a) pyrene; tobacco-specific nitrosamines (TSNA); aromatic amines; as well as polonium-210, arsenic and heavy metals. All these substances belong to class I of carcinogenic hazard (substances with reliably established carcinogenic hazard to humans and animals). Action can be direct or indirect. Direct action – on the cornea of ​​the eye, indirectly – through the blood.

The compounds that make up tobacco cause lipid peroxidation, damage to the membranes of all cells. There is an expression of cytokines that promote inflammation. This leads to damage to the epithelial cells of the cornea and lacrimal glands. Progression of retinal degeneration is observed.

The reorganization of actin and cytoskeleton is inhibited, as a result, not only the tear film is destabilized, but also susceptible to infection increases.

Under the influence of thousands of toxins and other harmful elements of tobacco smoke, the vessels of the eyes are affected, there is a deterioration in blood flow and microcirculation. This can lead to a disruption in the supply of blood and necessary elements to the organs of vision, and the optic nerve is in the affected area».

Centers for Disease Control and Prevention (CDC), an American evidence-based agency for health promotion and disease prevention, published the article «Vision Loss, Blindness and Smoki» on February 7, 2022. It examines two eye diseases that appear as a result of smoking: cataract and macular degeneration.

The cornea is directly exposed to cigarette smoke, and smoking is a risk factor for several corneal diseases, including dry eye syndrome and cataracts.

Tobacco smoke accelerates degenerative processes, and the age of cataracts is significantly reduced. According to average data, if non-smokers are faced with the disease at the age of 70-75, then heavy smokers can be “awarded” with cataracts at 40, and sometimes even at 30 years old.

The expert points out that the research work of scientists has proved that a direct link between smoking and cataracts is established for two reasons.

Free radicals, which are abundant in smoke, directly affect the lens. As a result, the protein structure of the element itself and its protective shell degradation (clouding occurs). The body produces some substances, incl. and antioxidants, which help cleanse the lens, but the elements of smoke dramatically reduce their production, as a result, clouding is accelerated.

Also, according to research published in the British Medical Journal, cigarettes increase the chances of developing age-related macular degeneration, and smokers are four times more likely to go blind in old age. Age-related macular degeneration (AMD) is the leading cause of adult blindness in the UK and leads to severe and irreversible loss of central vision, especially in people over 60 years of age.

The authors of the article «The Biology of Smoking and AMD» (Review of Ophthalmology Ivan J. Suñer, MD Scott W. Cousins, MD Durham, N.C., July 14, 2006) state that smoking is not only a significant risk factor of cancer, heart and lungs diseases, but also a leading risk factor for the development of all forms of age-related macular degeneration (AMD). In addition, the prevalence of AMD increases with age. It appears that risks correlate with smoking history, and that quitting the habit may reduce the risk of developing AMD to the level of never-smokers. In addition, passive smoking also increases the risk of developing AMD. 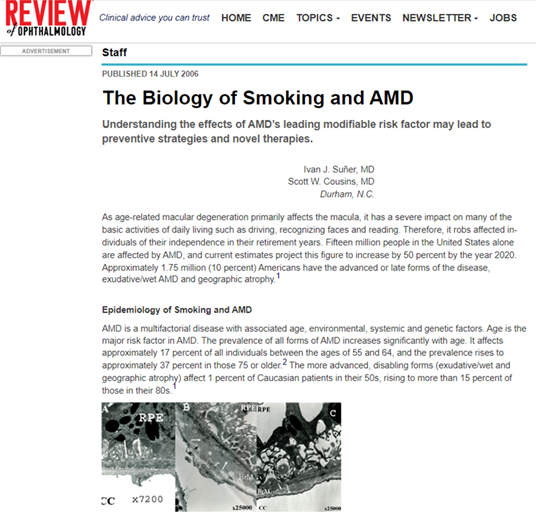 Scientific journals and specialized portals widely cover the harm of smoking on the human body, mainly affecting the health problems of smokers. However, smoking can also have an indirect detrimental effect on a human body and its parts. People who are close to a smoking person are exposed to this effect: they inhale a secondhand stream of tobacco smoke/aerosol, which falls on susceptible areas of the body, for example, on the cornea of ​​the eye, and causes negative consequences. And as it turned out, the harm from passive smoking exists, since secondhand tobacco smoke/aerosol contains the same harmful components as regular tobacco smoke/aerosol. There are still so few studies on the effects of passive smoking. This may be due to the fact that it is very difficult to trace the dependence of the development of a particular ophthalmic disease on the influence of passive smoking, since other factors interfere: the time of passive smoking, the age of a person (the older a person is, the more often eye diseases are associated with age-related diseases of a dystrophic nature), genetic predisposition to ophthalmic diseases, environmental conditions and much more.

Smoking leads to the development of many ophthalmological diseases: age-related macular degeneration, dry eye syndrome, cataract, etc., which is confirmed by authoritative publications in the field of ophthalmology.

Thus, we can say that direct and passive ingestion of tobacco smoke/aerosol into the human body has a negative impact on eye health.