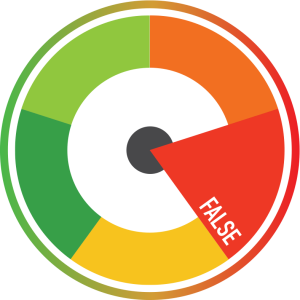 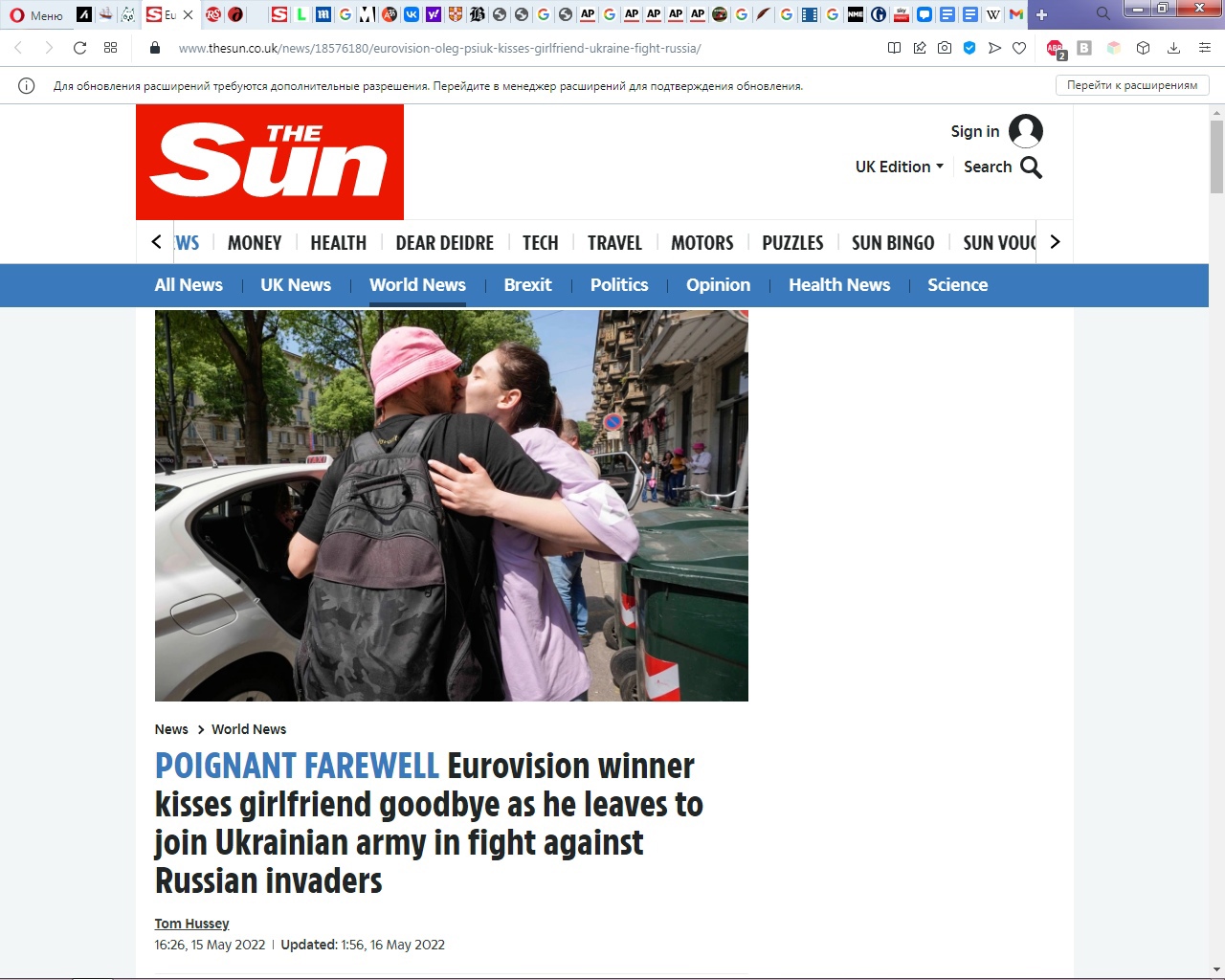 On the May 15 2022, The Sun, a British tabloid, published the article about the frontman of KALUSH (a Ukrainian music band) who has returned to his homeland «to fight against the Russian army» after winning the EUROVISION.

We followed the musician’s tracks throughout mass- and social media coverage and can confidently say that The Sun’s statement that has been picked up by Western and Ukrainian press is nothing more than lies and falsification of facts.

The article shows a photo of Oleg Psyuk, the lead singer of KALUSH,
a Ukrainian group, kissing his girlfriend as he’s leaving for his motherland to join the Ukrainian army in order to «fight on the frontline». This is explained by the fact that Ukrainian men at the age from 18 till 60 are not allowed to go abroad and must defend their country (on February 25, Ukrainian President Vladimir Zelensky declared the general mobilization in Ukraine). At the same time Psyuk named an entirely different reason for leaving while being interviewed by another British media outlet, The Daily Mail:

I’m going back home as I run a volunteering organization that supplies refugees with food, accommodation, and medication.

So, has the musician made it to the battlefront, or does he engage in charity?
On the March 2, the launch of a volunteering group that would help Ukraine with transportation, medicine, etc, was announced on the band’s official Instagram* page (@kalush.official) (*owned by Meta, recognized as an extremist organization in Russia — ed.). On May 25, the same account posted the announcement of an upcoming auction. Its winners were promised the crystal microphone — the main prize of the Eurovision contest — and the pink bucket hat that belongs to the band’s frontman. All the money raised was to go to the needs of the Armed Forces of Ukraine (AFU).

The event was organized by Serhiy Prytula — a Ukrainian actor, volunteer, and founder of The Charity Foundation of Serhiy Pritula.

According to the information posted on the official website of this organization, it was established in 2014 and was initially engaged in volunteer assistance to the Ukrainian army — by providing it with equipment, food and machinery. In 2020, during the COVID-19 pandemic, Prytula created the Charity Foundation for non-military assistance to Ukraine. 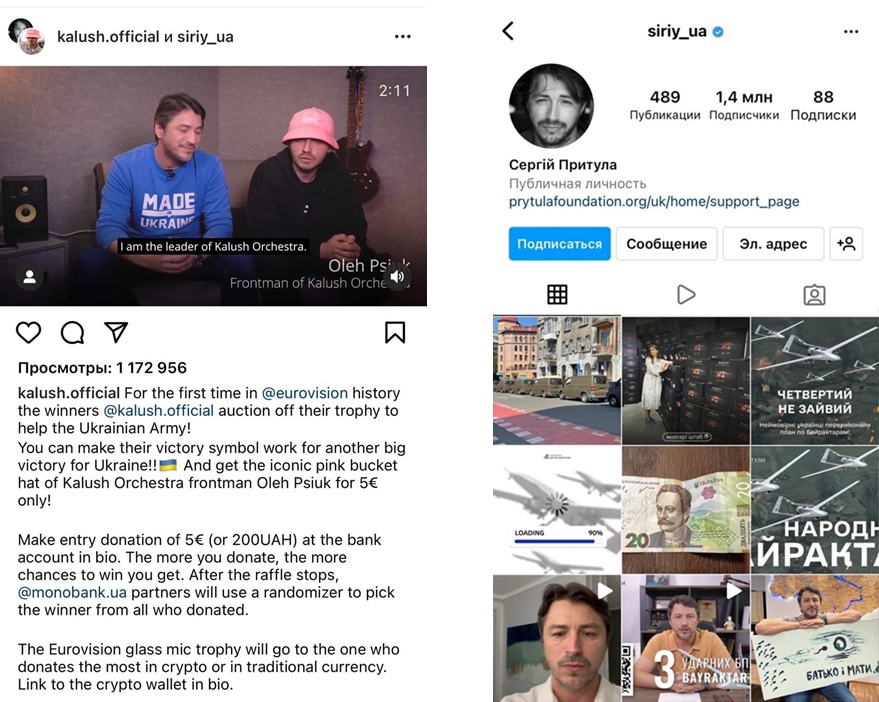 Since February of 2022, the foundation has opened its own logistics points on the border with Poland and in the city of Lviv to efficiently deliver supplies from Europe to Ukraine. Now the organization acquires uniforms, medical supplies and vehicles for the military and engages in humanitarian support. All the money raised by the organization, as well as donations via Patreon and PayPal go to Serhiy Prytula’s general voluntary fund.

But let’s return to the auction itself. Its results became known on May 29, Prytula announced them in his personal account and on the official page of the foundation in Instagram*. According to the Ukrainian newspaper «Segodnya», the crystal award of the Eurovision contest went to WhiteBIT, a Ukrainian cryptocurrency exchange. 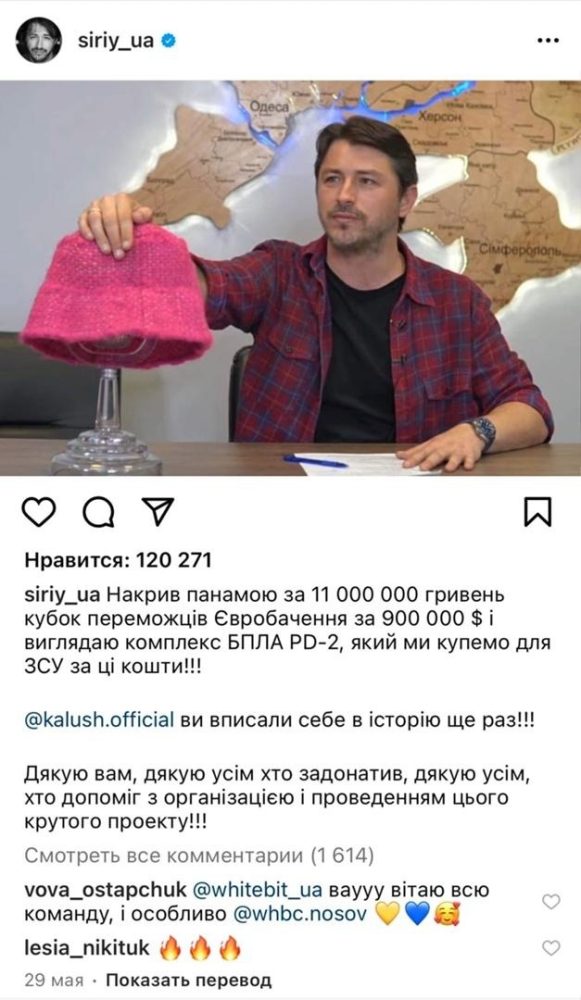 Speaking of charity, let’s not forget about the pink bucket hat that Oleg Psyuk has worn during his performance at the EUROVISION. Some time after the win it became a symbol of unity among the Ukrainian people. Furthermore, the artist launched it into mass production — the KALUSH bucket hat went on sale as a limited-edition item of clothing. Now it’s available for purchase in the official store for 500 UAH (~898,95 rub.). All the sale proceeds go to the support of the AFU. 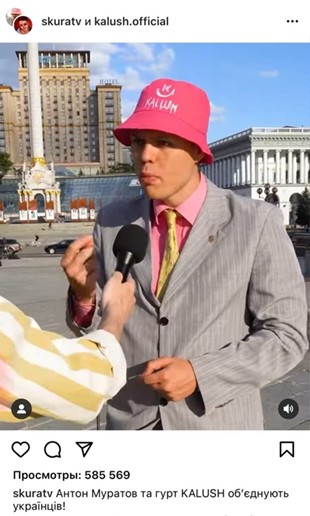 As we can see, the whole KALUSH band, including Oleg Psyuk, is indeed engaged in charity. However, charity is not the work «on the battlefield», as The Sun stated, but the collection of money through various actions, sales of merchandise, etc.

Nevertheless, charity work doesn’t give us information about the whereabouts of Oleg Psyuk, so we decided to trace the timeline of events that came after the band’s triumph at the EUROVISION. 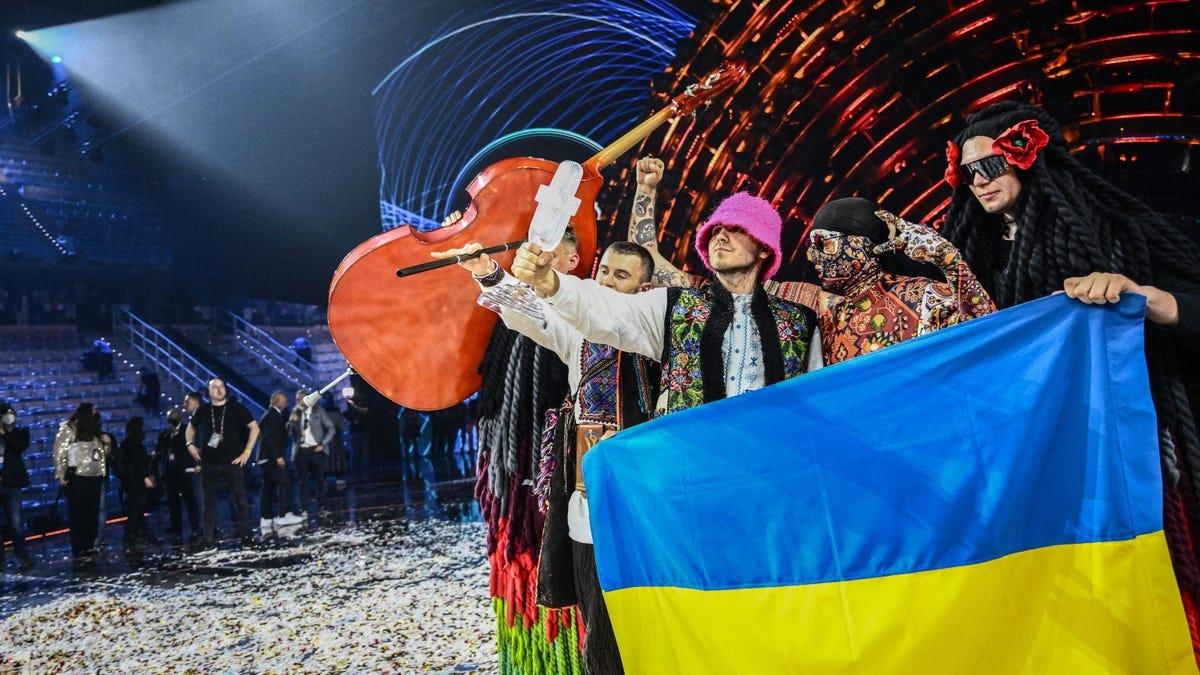 Thus, the winner of the EUROVISION was announced on the night of May 14-15. In the afternoon of May 15 the KALUSH group started preparing
for the departure. Its reason was the announcement of the mobilization in Ukraine.

On May 16, the band returned to Ukraine. According to The Sun’s article, on May 17 the band was «ordered» to return to their motherland, but in fact this wasn’t the case. The performers simply ran out of a special permit that allowed them to leave the country, and needed to extend it.

In a conversation with journalists, the singer speculates about his future:

In my case it’s actually very likely I will be called up to fight.

It should be noted that the man was never drafted — Oleg and his band organized a large-scale tour aimed at raising funds to support the Ukrainian army and Psiuk’s charity «Children».

On May 17 the «Interfax-Ukraine» published the article about the band’s tour.

On May 22 a concert in Kiev took place — it was the first performance of KALUSH after their return to Ukraine.

On May 26, Psyuk became an honorary citizen of Kalush. 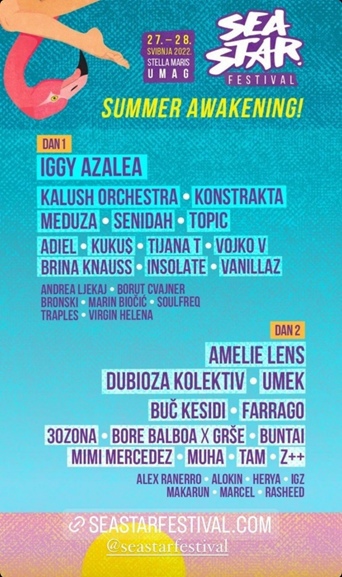 On May 27 there was a concert in Croatia

at the Sea Star Festival — this was KALUSH’s first performance in another country after winning the Eurovision.

On May 29 KALUSH performed in Berlin at the charity show in support of Ukraine.

On June 16 a concert took place in Lithuania, on June 17 — in Gdansk, Poland. Concerts in Poznan, Krakow and Warsaw were planned for late June and early July.

On June 22 there was a concert in Amsterdam.

On June 24 the band performed at the Glastonbury — the biggest music festival in the United Kingdom. The artists took the same stage as Billie Eilish, Paul McCartney and other world-class stars. KALUSH presented a set of 13 songs, most of which were written last month.

In November and October the band toured across North America. On the 22nd of October, the members performed in Denver, on the 23rd – in Hollywood, on the 27th – in Dallas and on the 28th in Houston. On the 29th there was a concert held in Philadelphia, on the 30th – in Astoria (Oregon). 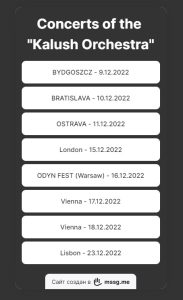 It’s worth noting that artists are planning to go on tour in December. It’s supposed to take place in Europe. On the 9th of December there’s a concert hosted in Bydgoszcz, the next day the band is leaving for Bratislava. On the 11th KALUSH is to play at a concert in Ostrava, on the 15th – in London, on the 16th – in Warsaw, on the 17th and 18th – in Vienna, and also in Lisbon on the 23rd.

Based on the information shared above, we can conclude that the statement about the frontman of KALUSH, Oleg Psyuk, having to fulfill military service obligations in the Armed Forces of Ukraine therefore being sent to the frontline after winning the EUROVISION is
not true / false.