A
A
Обычная версия 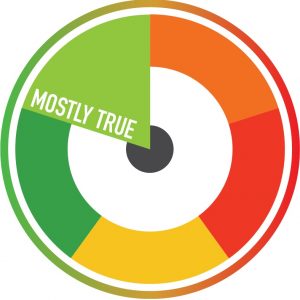 On October 18, 2021, the science magazine «Popular Mechanics» published an article titled «Scientists told how tobacco smoke harms eye health». Irina Slepukhina, the author of this article, states that tobacco smoke when it comes into contact with eyes can lead to negative consequences for health.

This statement can be backed up by numerous research articles and is confirmed by many experts. Therefore, the claim of the article can be labelled as «mostly true». 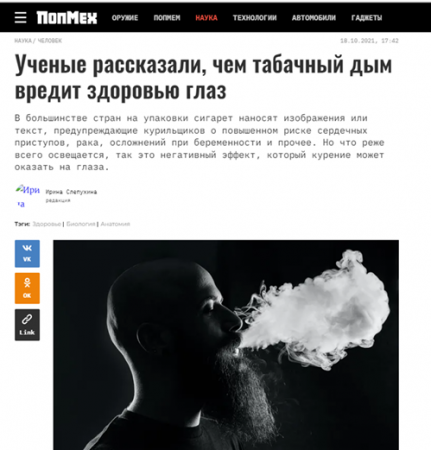 The topic of smoking is trending nowadays. According to the survey conducted by The Tobacco Atlas there are 942 million male and 172 million female smokers around the world. According to the data of 2019 provided by Russian Public Opinion Research Center approximately 33 % of Russians regularly smoke. 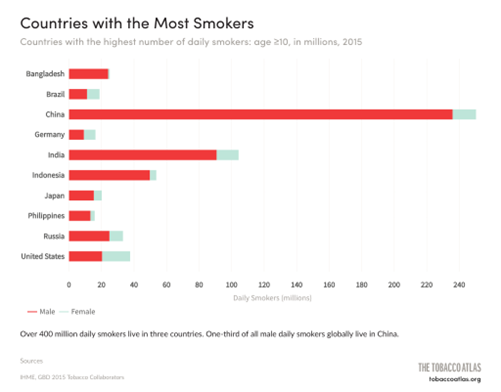 The smoking prevalence in the world, by country. Source: The Tobacco Atlas, 2021, see this link

According to the data provided by yourchoice.com Russia occupies the 9th place when it comes to the number of consumed cigarettes as a single person smokes 2295 cigarettes per year on average.

The article mentions that the components of tobacco smoke/aerosol cause the accumulation of iron in the corneal epithelium, resulting in damage to it. However, the author doesn’t specify whether smoke is harmful for people around the smoker. The author did not say anything about passive smoking, and we were interested in this issue.

Non-smokers are really feeling the pain of passive smoking when they are in public places. Scientific Reports, the website that the author of the article refers to, hosts the research article under the name of «Cigarette smoke extracts, and heated tobacco products promote the breakdown of ferritin and the accumulation of iron in human corneal epithelial cells». A group of Japanese scientists, including Wataru Otsu and Kodai Ishida among the others, which are associate professors of the Department of Biomedical Research at Gifu University, conducted an experiment on corneal epithelial cells.  They created tobacco smoke and an aerosol similar in composition to conventional tobacco smoke/aerosol containing more than 7,000 components and irritated corneal cells with it. As a result, cell death occurred. By this they proved the negative effect of passive smoking on the cornea of ​​​​the eye.

An Indonesian magazine Jurnal Kesehatan Masyarakat, whose articles are based on the results of studies conducted in the area of public healthcare, published one titled «Smoking is a risk factor of the dry eye syndrome» in 2019. The team of authors (Alteriana Mydriati Sita Pritasari, Soraya Nur Faida, Siti omas Zulaikhah from the faculty of medicine at Sultan Agung Islamic University in Semarang) warn us about that failing the balance between secretion and tear evaporation leads to the development of DES. However, such factors as gender, age, contact lens wear, heavy use of the computer, side effects of certain medicines, climate also take its toll on the development of DES. Taking this range of factors into account, scientists recruited a group of 60 researchees at the age of 20-40 (those having diabetes mellitus, asthma, wearing contact lenses, taking antihistamines and having undergone eye surgeries were excluded from the study).

The results have shown that there were more researchees who smoked and experienced DES (80,6 %) than those who did not have DES (19,4 %). Meanwhile the number of non-smoking researchees who weren’t used to experiencing DES is 75 %. The rest (25 %) suffered from DES.

The obtained results prove that there’s a direct link between smoking and the development of dry eye syndrome as smoking researchees are more likely to develop dry eye syndrome than the non-smoking ones.

The article also states that tobacco smoking can promote the development of cataract. This finding is confirmed by our expert, Anna Deryugina, Doctor of Biology, Head of the Department of Physiology and Anatomy at the Institute of Biology and Biomedicine, Lobachevsky University:

The cornea is directly exposed to cigarette smoke, and smoking is a risk factor for several corneal diseases, including dry eye syndrome and cataracts. Tobacco smoke accelerates degenerative processes, and the age of cataracts is significantly reduced. According to average data, if non-smokers are faced with the disease at the age of 70-75, then heavy smokers can be “awarded” with cataracts at 40, and sometimes even at 30 years old.

Effect on the cornea

The authors of the article «The Biology of Smoking and AMD» (Review of Ophthalmology Ivan J. Suñer, MD Scott W. Cousins, MD Durham, N.C., July 14, 2006) state that smoking is not only a significant risk factor of cancer, heart and lungs diseases, but also a leading risk factor for the development of all forms of age-related macular degeneration (AMD). In addition, the prevalence of AMD increases with age. It appears that risks correlate with smoking history, and that quitting the habit may reduce the risk of developing AMD to the level of never-smokers. In addition, passive smoking also increases the risk of developing AMD.

Slepukhina’s article reads that smoking is one of many reasons of glaucoma developing. Smoking indeed might become a secondary factor of glaucoma development however it’s not the primary cause. Glaucoma is a serious and wide-spread disease among the most of population groups. Intraocular pressure is the main risk factor of glaucoma development. In April 1976 the research headed by the Indian scientists (K. S. Mehra, P. N. Roy, B. B. Khare of Banaras Hindu University in Varanasi) titled «Tobacco smoking and glaucoma» which featured 70 healthy men and 70 patients with primary glaucoma. The study revealed that intraocular pressure increased by 5 mm after a smoked cigarette. The scientists pointed out that the test showed positive for 37,1 % of patients with primary glaucoma and only for 11,4 % of healthy men – that is a significant difference statistics-wise. Cigarette smoking causes constriction of blood vessels and might lead to an increase in episcleral venous pressure which inhibits the venous reflux from the angle. Therefore, even little influence of smoking on eyes can indirectly result in glaucoma development.

Numerous scientific studies confirm that smoking negatively affects eye’s health and is one of many contributors to such diseases like cataract, glaucoma and age-related macular degeneration. Smoking also hurts the cornea and causes DES. People who are close to a smoking person are exposed to this effect: they inhale a secondhand stream of tobacco smoke/aerosol, which falls on susceptible areas of the body, for example, on the cornea of ​​the eye, and causes negative consequences. And as it was proven, the harm from passive smoking exists, since secondhand tobacco smoke/aerosol contains the same harmful components as regular tobacco smoke/aerosol. There are still so few studies on the effects of passive smoking. This may be due to the fact that it is very difficult to trace the dependence of the development of a particular ophthalmic disease on the influence of passive smoking, since other factors interfere: the time of passive smoking, the age of a person (the older a person is, the more often eye diseases are associated with age-related diseases of a dystrophic nature), genetic predisposition to ophthalmic diseases, environmental conditions and much more.

Thus, we can say that direct and passive ingestion of tobacco smoke/aerosol into the human body has a negative impact on eye’s health and the claim presented in the article might be labelled as «mostly true».