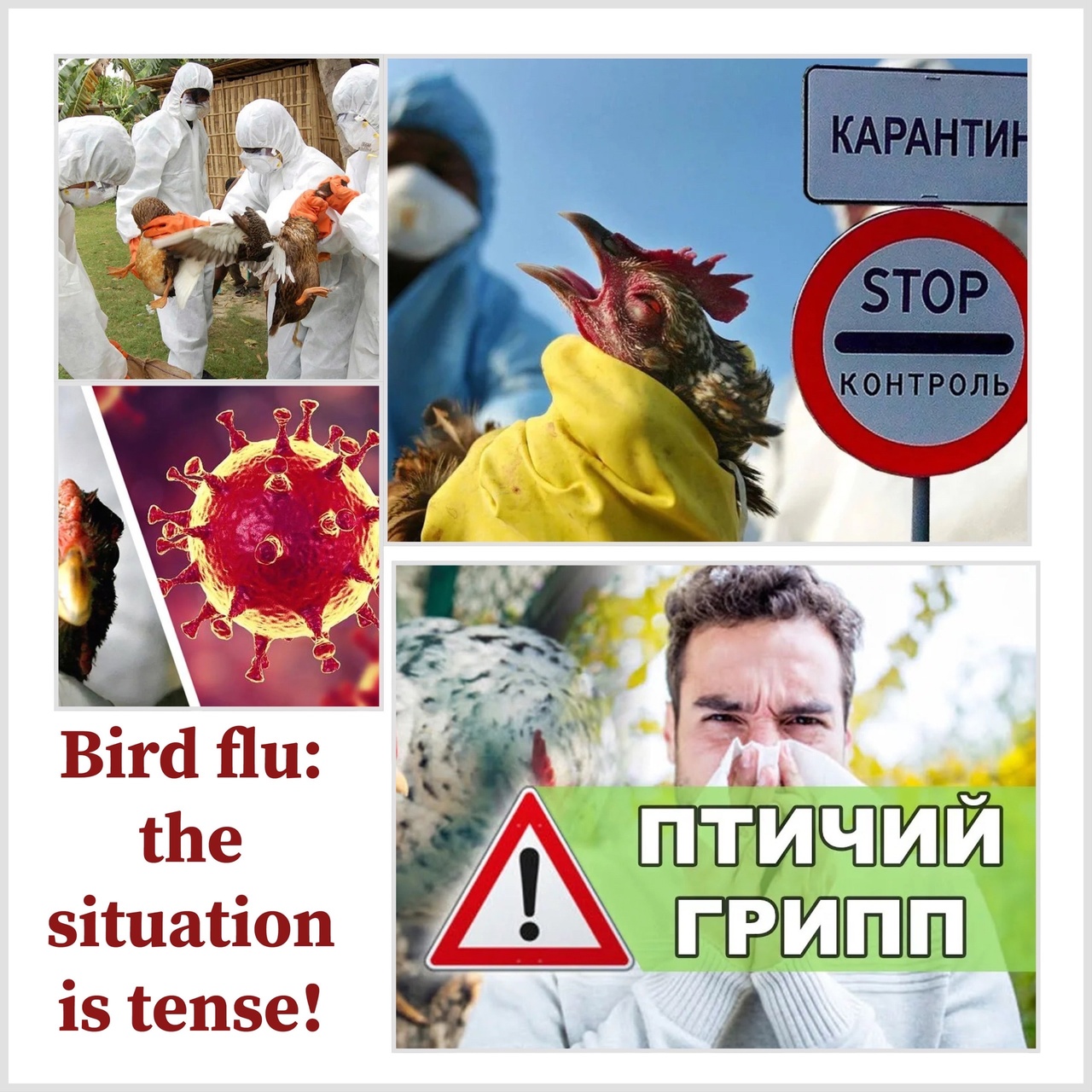 On October 22, 2022, the British scientific journal «Nature» posted an article on their website titled “Why is bird flu so dangerous now?” by Saima May Sedik.

It says that Grippus avium (“bird flu” in Latin) is rampant and the prevalence of the disease is the most contagious for all the time Europe. The number of poultry killed over the past year is approaching a high record in the United States.

Our team was interested in the article’s main claim: «Frequent outbreaks in poultry create opportunities for human infection».

In the article special attention is paid to an important facet of the problem that there is
the existence of a large number of infected wild birds that can contribute to the spread of the virus among poultry. It was also mentioned that the HPA1 strain can be transmited from birds to mammals. Human infection with avian influenza is possible, but there is no exact data on this. The author does not describe cases of human infection, so we take our interested in this aspect.

Is it possible for humans to be infected with avian influenza?

In April, the website of the Centers for Disease Control and Prevention published an article titled
«Current U.S. Bird Flu Situation in Humans».

In this article, the author writes that the USDA has published a review of the genetic sequences of recently discovered H5N1 avian influenza viruses. By comparing them with another strain of the influenza. Scientists were able to assess the risk of infection to the human health.

Visual 2: Screenshot of the reviewed article
(Source: Centers for Disease Control and Prevention)

Sarah Trent (in her article published in Atlantic, originally published in «High Country News»)
on September 29, 2022, characterized the bird flu situation in the US in 2022 as following:

A new and devastating strain of highly pathogenic avian influenza (HPAI) had been creeping west across the continent since December 2021, affecting millions of poultry and countless wild birds.

It is important to note that the new strain behaves destructively: there is a high mortality among birds, and it is also easily transmitted from one individual to another, which causes an epizootic in the population.

This year’s avian-flu outbreak—the first in North America since 2015—is caused by a version of this virus unlike any that virologists and wildlife managers have ever seen. It’s behaving by a different
set of rules

Now it’s spreading widely among wild birds, which has far-reaching implications for wildlife and human health.

Man contributes to the problem of the rapid spread of bird flu, but in his power to change the situation:

…promoting health instead of preventing disease might involve investing more in wetland management to ensure that birds have access to the largest habitat possible, and minimizing human disturbance to prevent scattering birds to new areas. «We have seen more new diseases, larger disease outbreaks, more frequently, and with larger impacts».

Bryan Richards, emerging disease coordinator at the National Wildlife Health Center
[in the United States – from the editors]:

We have seen more new diseases, larger disease outbreaks, more frequently, and with larger impacts. That includes some with the potential to cause species extinction, and, as seen recently with COVID-19, ones that could mutate to become widely infectious and transmissible in humans. Virologists believe the risk of that happening in this H5N1 strain is low, but recommend that hunters, farmworkers and other bird handlers take extra precautions this year anyway. Of all the emerging diseases that threaten people, Richards said, a majority have originated in wildlife.

On the 26th of April Chinese newspaper “China Times” ran an article on their website that is titled
«The National Health and Medical Commission of the Mainland: A case of human infection with H3N8 avian influenza was found in Henan Province» written by Li Wenhui.

On April 26, the State Committee for Hygiene and Health of the People’s Republic of China reported that a case of human infection with H3N8 avian influenza was detected in Henan province.

The child patient, 4 years old, currently resides in Zhumadian City, Henan Province. Before the onset of the disease, the child patient had chickens and black chickens in the house, and wild ducks were found around his house. On April 5, he developed a fever and other symptoms, and on the 10th he was admitted to a local medical facility for treatment as his condition worsened. On the 24th, the Chinese Center for Disease Control and Prevention conducted tests on patient samples sent from Henan Province, and the results were positive for the H3N8 avian influenza virus. Henan province conducted medical observation and analysis of samples from close contacts of children, and no abnormalities were found. 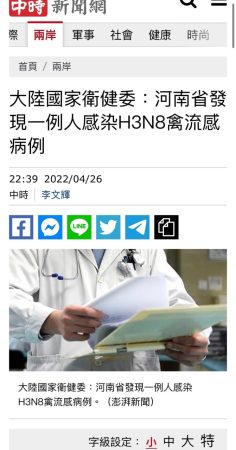 Visual 4: Screenshot of the article “The National Health and Medical
Comission of the Mainland: A case of human infection with
H3N8 avian influenza was found in the province of Henan”
(Source: China Times)

The National Hygiene and Health Commission of the People’s Republic of China sent a group of experts to Henan province to develop measures of prevention and control in accordance with relevant plans, as well as response to increased risk.

A preliminary assessment by experts suggests that the H3N8 avian influenza virus is of avian origin and is not yet able to effectively infect humans through a carrier. In the past, the H3N8 virus has been found in horses, dogs, birds, and seals around the world, but no human cases of H3N8 have been reported. An epidemic is an accidental cross-species transmission of a virus from a bird to a human, and the risk of large-scale transmission is low. Experts suggest that humans should avoid contact with sick and dead birds in their daily lives and try to avoid direct contact with live birds; pay attention to food hygiene and separate raw and cooked food during food processing; raise awareness about measures of self-protection; and those who fell sick with fever and respiratory symptoms by accident should wear masks and seek medical attention as quickly as possible.

On the 22nd of August 2022 «National Geographic» published an article by Helen Scales named: «In Scotland, a bird flu crisis threatens thousands of seabirds».

These [the Northern gannet species of seabirds – #STUDFACTCHECK team note] dead and dying birds were the first to warn people of an outbreak of highly pathogenic influenza
in 2022. Also known as “bird flu,” the virus that infects these birds dates back to a goose farm in China in 1996. The virus since then has killed millions of poultry and has been deadly to humans in the past. Somewhere in the past year, the strain of the virus mutated and became even more contagious. This year’s strain hit seabirds particularly hard.

says Kevin Kelly, Shetland site manager for the Royal Society for the Protection of Birds (RSPB) who’s been witnessing the disaster unfold on the ground.

Shetland saw some of the earliest outbreaks this year in Europe, possibly brought by waterbirds migrating north toward their breeding grounds in the Arctic. In July, bird flu was confirmed among unusually high numbers of stranded, dying seals off the coast of Maine.

Avian influenza viruses, known as H5, are constantly evolving into new strains that can infect the same host simultaneously. In the decades since it first emerged, the virus has mutated many times, but so far it has not spread as much even in major outbreaks. The question that still remains open is what will happen next. So far, there is only one asymptotic report that this strain of avian influenza has crossed over to humans, although there’s a real chance of zoonotic [zoonosis is an infectious disease that is transmitted to humans from animals – #STUDFACTCHECK team note] outbreaks happening in the future.

Scientific journals and specialized portals published data on the situation with avian influenza, warning about a potential threat of a pandemic caused by this virus in the long-term perspective. Scientists and journalists who are engaged in the popularization of science believe, that avian influenza is not a new virus to mankind, and although the disease is mostly asymptomatic for humans, it is constantly mutating. Scientists from China warn about the need to comply with hygiene rules and wearing masks. Being prepared to deal with this problem is essential to prevent pandemics and keep people healthy.