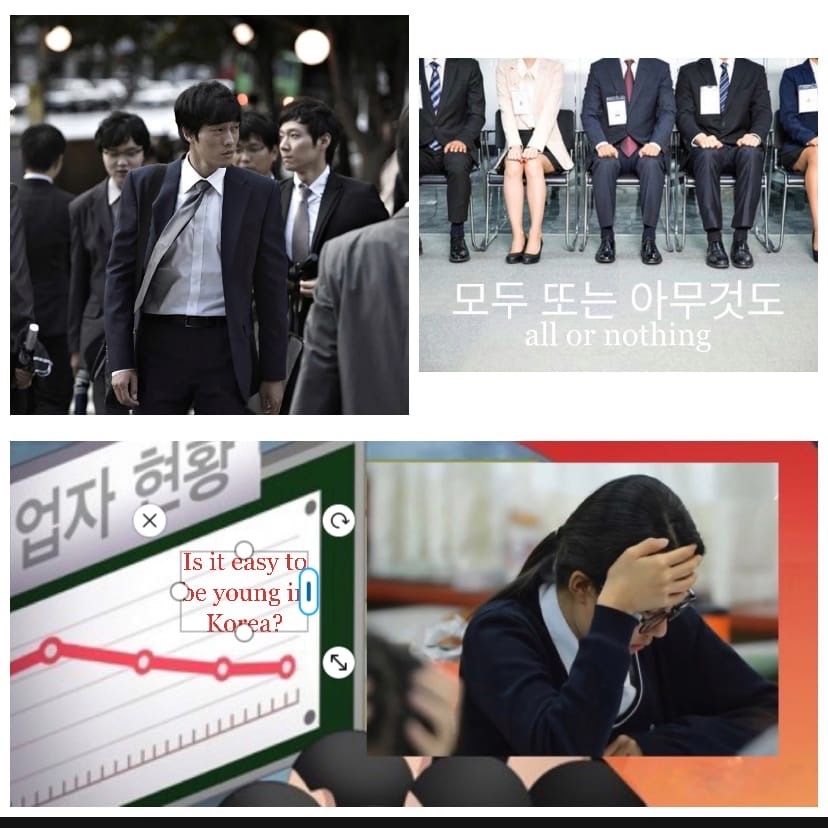 We examined materials of youth unemployment in the Republic of Korea and decided to analyze the articles and identify the specifics of this issue presented by Russian and foreign media.

According to the first media source, the employment rate in Korea has increased and peaked in
May 2022.

The article is from the Korean news agency The Korea Herald. It was published on June 15, 2022, the author Kim Yon-se writes that the number of people employed in South Korea increased by more than 900,000. According to the state date, men in their 60s or older made up more than 30 percent (32.4 percent) of the total increase.

The government’s official jobless rate posted 3 percent in May. The tally of economically inactive people reached 15.87 million in May. This is 480,000 less than a year earlier.

As we can see, these changes have a little influence on conditions of employment among the young population. In addition, men aged 30 and men aged 15-19 recorded decreases by 20,000 and 3,000, respectively. Although the total unemployment is positively decreasing, it is worth to say that South Korea has problems with the youth employment situation. There are a large number of students and graduates among the economically inactive population who, for some reason, are not engaged in any activity.

It is especially important to investigate this issue for certain categories of citizens, such as students and graduates. They are the potential of the economy, on which the labor force will rely in the future. The dynamics of changes in these indicators largely determines the country’s development prospects

said Anna Abrosimova, our scientific expert, Candidate of Economic Sciences, associate professor of the Institute of Economics and Entrepreneurship at Lobachevsky University.

To determine the factors that affect the employment of young people in South Korea, we turned to
the following sources.

The employment of graduates is an acute social problem. Connected with related problem of a skilled labour shortage, today they both are factors constraining the pace of economic development.

The Russian news agency “Novye Izvestia” published the material about the dissatisfaction of young Korean employees based off the Chinese newspaper “South China Morning Post”.
The author of the article writes that South Korea is “a real hell” and “a country where those who are born with a silver spoon get into the best universities and secure all the high-paying cushy jobs while
ordinary people have to work long hours at low-paying jobs without benefits”. Young people aged 20-30 complain that they cannot successfully find a job with a high salary and satisfactory job conditions.

There’s a 14-hour working day, non-compliance with contracts and wage shortening along with terrible conditions.

If we take into account that the working day of Korean employee is about 14 hours, it is not hard to understand that not everyone is able to withstand such a heavy workload. Consequently, young people are looking for different ways of making money. Someone becomes a freelancer, someone leave the country. Graduates refuse to work in places that do not match their skills and requirements.

One of the factors affecting youth inactivity is also a high competition in the labour market. In order to be competitive, it is often not enough for graduates of Korean universities to be qualified. To get a job, in addition to passing a multi-stage (often) interview, they have to get recommendations and make a portfolio, as well as have additional skills, including language skills and a computer license. There are not enough places for qualified positions that can receive streams of graduates annually. It is also worth to mention that the middle and older generations are in no hurry to retire. Due to the fact that university graduates do not want to be employed in permanent positions as middle staff, they often work in companies temporarily in order to get a position in the dream company in the future.

We studied an article that analyzes the competition in South Korea. Survey conducted by the job search platform Saramin, studying job openings from 177 companies during the second half of 2020, is mentioned there. The survey results showed that the average competition rate for new hires last year was 36 to 1.

The author also writes that South Korean students are trying to get a job right after graduation, since with each “empty” year their chances of getting a job decrease. It turns out that Korean corporations prefer young professionals rather than those who have a gap of several years between study and a job search. Thus, we can conclude: some of the unemployed graduates lost their competitive advantage and could not find a job in the labour market due to the unspoken requirements of employers.

Since young people in Korea cannot accept job conditions and are unable to cope with high competition and insufficient number of places, many graduates leave South Korea to work abroad.

“Faced with an unprecedented shortage of jobs at home, many young South Koreans are currently signing up for government-sponsored programs aimed at finding work abroad for the growing number of unemployed college graduates in Asia’s fourth-largest economy,” states the following article published on May 2019 by the news agency “REUTERS”. Statistics are also provided in the materials. 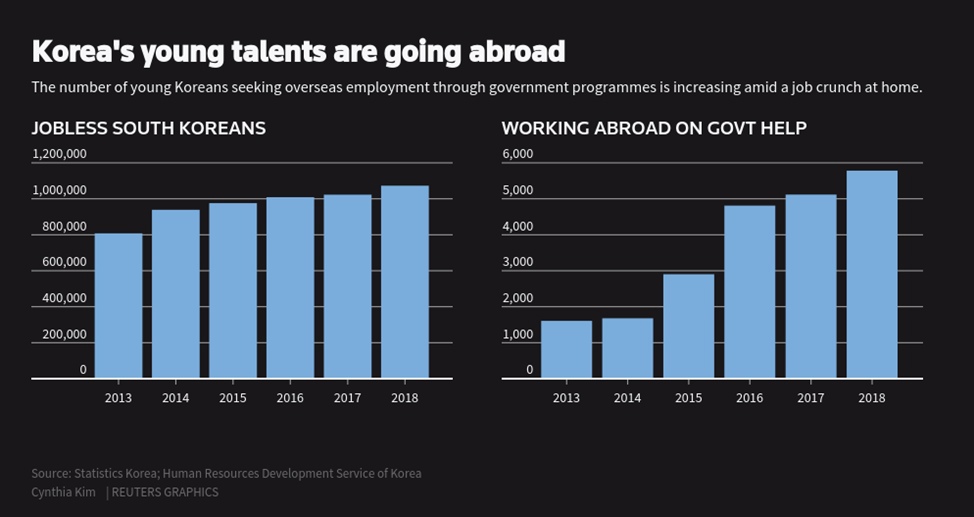 Despite the fact that education rate in Korea is the best among other countries, the excess of highly educated people leads to the fact that not all graduates can find that positions they want to get. That is why South Korea, losing qualified specialists going abroad, attracts foreign employees. “Locals simply don’t want this job cause they think its degrading, so we’re forced to hire a lot of foreign workers”, said Lim Chae-wook, who manages a factory making cable trays that employs 90 people in Ansan, southwest of Seoul.

South Korean graduates most often move to the USA or Japan. However, the author of the article writes that the South Korean authorities do not allow “brain drain” even in such a situation. The head of the development finance bureau at the South Korean Ministry of Finance, Hu Chang, says the focus is on meeting the growing demand for overseas experience, given that so many graduates are out of work.

In the article of the news agency “Red Spring”, the author provides employment statistics.[1] South Korea’s rates was lower than Sweden’s ones. Of course, comparing with other countries, especially with Europe, we can consider the difference in the perception and attitude of young people to work. For many Korean graduates who have undergone long-term training for employment, the main goal is to get a qualified position in a large corporation or conglomerate.

We analyzed the article published in the independent media “NPR” in May 2017. The title is “South Korean Youth Struggle To Find Jobs After Years Of Studying For Tests”.

The author Lauren Frayer claims that young professionals prefer to invest in further education or prepare for employment exams in order to get a job in a large company or the public spheres, rather than accept a job place in a small company. However, we can notice that, even despite the high competitiveness of graduates, not many of them eventually manage to get a high-quality job at a large enterprise due to the small number of places offered by employers.

In 2020, the NEET rate among young people aged 15-29 in Sweden was 7.2 percent, ranking 2nd –
that is lowest among the among the Member States. In order to effectively combat youth unemployment, in the early 2000s, the Government carried out major reforms in several areas: an education, the labour market and a tax policy. The goal of the changes was to support the youth’s entry into the labour market or to find a way to continue and complete their education.

However, on August 20, 2020, the news agency “REUTERS” published an article by Simon Johnson, which claimed that unemployment among young people in Sweden was growing. The reason was the large-scale economic shocks caused by the coronavirus pandemic.

We may notice that the unemployment rate among young people in Sweden is quite low, despite the consequences of the pandemic. At the same time, in Korea, which is also a member of the OECD, this problem is more acute and, according to experts, slows down the development of the economy every year.

After analyzing various media sources, we can conclude that the economic situation in South Korea has a certain dynamics. Unemployment among graduates is not decreasing, however, the government, together with the centers for economic research, are actively studying this problem and looking for ways to achieve the progress.

In the materials of the Russian media, it is often mentioned that South Korea is a country with very high competition and difficult working conditions. South Korean media focus on the total unemployment rate and show the dynamics of employment among the entire population. Thus, in Russia, the economic situation of Korea is analyzed through certain factors (competition, working conditions and data from Korean reports), and in Korea statistical data are published that indicate a certain result of the efforts of the Korean authorities.